The easy way to distinguish between the two is the casting. Spin casting takes no great skill in positioning or reaching long distant target areas. Just about any casting style can be used. That is because the weight of the lure, also called a ‘spinner’, drags the line off the reel. The weight of the tackle ensures easy delivery. After that, the spinner is dragged back through the water in a stop/start motion that imitates the abrupt movements of a baitfish or prey. The movement and brightness of the lure attracts the attention of the predator fish.

With fly fishing on the other hand, the lure, which is an artificial fly that hardly has any weight at all, has to be placed. Therefore, getting it to the designated area of the water in which you wish to fish is that much more difficult. Effectively, it is the weight of the line, not the lure or a sinker, that carries the fly to where you want it to go. Over the years in the development of fly fishing, different casting styles have been experimented with and are now standard practice. It all depends on the water you are fishing, the fly fishing line and rod weight,  the physical environment and which fish you wish to catch. There are no hard and fast rules for either kind of fishing. In fly fishing vs spin fishing there are too many variables. Traditionally, fly fishing was developed for catching trout and salmon and has been around for a long time. It was once considered to be an elitist sport, but times have changed and now anyone can do it. Spin fishing is a relatively modern addition, developed through the manufacture of modern lures, rods and reels.

In Britain, game fishing refers to trout, salmon or grayling and are fished using the fly-fishing method. Game fish have always been seen as fighting fish in the sense that they are hard to catch and land. It takes skill to entice these fish to take the bait, keep on the line and land. The term course fishing refers to the rest of the fish species. These are caught with tackle that includes a float or a spinner. With spin fishing there is a greater variety of fish that you can catch. Of course, there are other types of fish that will rise to the lure of a fly, besides trout or salmon. There is an overlap between these two types, nothing is cut and dried.

Most anglers will admit that the real difference is skill vs result, the number of fish you can catch with each method. Fly fishing is much more challenging and requires more skill.  The Americans distinguish between the two as cold-water and warm-water fish. The first means fast moving water that is colder than the temperatures in stillwater bodies of water, like lakes and reservoirs.

Spin casting is relatively easy to learn and dominate. It can be done overhead or sideways. All it takes is a bit of practise. It is a single cast method in which you flick out your tackle. Getting your line out to where you want is easy, because of the weight of the lure. The line stops leaving the spool when the lure hits the water. It can also be performed in more constricted environments, where there are bushes, overhanging trees, etc or where access to the water is difficult, if you are fishing from the bank. Picking up the casting knack is fairly fast and most spin fishermen only need to work on their accuracy of placing their lure. It is much simpler than the fly fishing method. Fly fishing casts are much more elaborate and require much more room. The casting method is called a false or double cast, which done by moving the rod back and forth. You can engage yourself in catch and release fishing when enjoying fly fishing.

The reason for this exaggerated style is the need to build up momentum and let out enough line before the actual cast, to achieve distance and placement. This is because the fly has no significant weight and cannot pull the line off the spool. There are several fly casting methods to learn and these are called:

Also there is another kind called ‘Dead Drifting’, which means to simply cast straight across a river and the fly floats on the current, keeping the line taunt. As you can see, there is a lot of techniques to learn and master when taking up fly fishing. The secret to it is practise and patience.

Fly fishing lures are called artificial flies and are designed to resemble flies and other winged insects that visit or hatch in the water. Some other types of artificial insects can also be used. The flies are usually made of fur or feathers. What you will use depends on the type of food supply that is available on the stretch of water that you are fishing. That also goes for spin fishing or regular fishing too. You must use the right lure to entice the kind of fish that you want to catch. Flies come in three basic types, which distinguish how they are used. They are also referred to as wet or dry, depending on whether they are used on the surface or underneath the water.

It has been found that trout especially, gather most of their food from under the surface and not as traditionally thought, haunt the surface in search of winged prey. They are economical predators that hang in the water mostly facing upstream and wait for their food to come to them. They like to wait in sheltered spots where both fast and slow currents join. That why the nymph and streamer flies have been developed.

Spin fishing lures are called spinners or spoons, depending on their design. They are synthetic lures made out of metal or plastic. Some are made to look like prey fish that predators feed on. Spin fishermen can also use live bait instead of artificial lures. They all have names and are used for different types of fish. Variety of bait equals the variety of fish that you can fish for.
The use of live bait depends on what kind of fish you looking to catch.

In fast water spin fishermen cast downstream and pull the lure towards them. In stillwater, they can cast anywhere. Of course, there may be spots on any body of water where fish congregate. The bed of lakes or rivers are rarely even and there may be holes where fish lurk, channels, in the lee of rocks in fast moving water, undercut banks or beneath the shadows of overhanging trees. Be prepared to change location and baits, whichever kind of fishing you are indulging in.

Fly fishing requires special fly fishing rods, which are lightweight and easy to handle because of the constant movement that is necessary, and a spinning reel. You can also find saltwater fly rods for inshore fishing. You need a good set of waders too. Spin fishermen typically do it with virtually any type of rod, but it’s best to use a spinning rod and spincast reel. That is just the basics and there many accessories that can be added.

For starters, fly or game fishing is much more expensive than coarse fishing. There are millions upon millions of anglers all over the world and this has spawned a huge industry to supply their needs. Mass production has brought down prices and the completion is fierce. There are always bargains to be found. With a little investigation and patience, you can find what suits your budget. It is recommended that novice fishermen or women start low budget and upgrade from there as their love and experience of the sport grows. That applies to both kinds of fishing or if you are switching from one to another. The large retail suppliers or the online options are a good place to begin, instead of the more expensive dedicated tackle shops. You can invest more in your sport as your interest and enthusiasm increases.

Which One to Choose?

That is personal preference. You can easily switch between the two. Beginners would be wise to start off with coarse fishing. Once they have mastered that kind of fishing they can go onto the much more challenging game fishing. Not only because of the greater expense of game fishing, but because first they need to develop the virtue of patience. 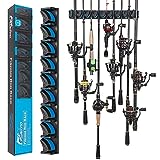 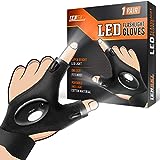 Lenski Valentines Day Gifts for Him, Flashlight... $16.99
SaleBestseller No. 5 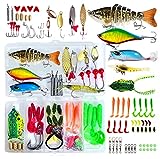 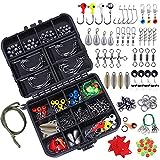